So Damien Jurado last night was AWESOME. I was really excited about seeing him play, mostly because his sweet songs have gotten me through the last 2 winters (which happened one after the other, resulting in me not having had a summer now for a year). I usually try not to get excited before I see a band in case they disappoint (anyone remember pop-folk band "Midlake"? Been to one of their concerts? Yeah.) but Damien was so so good. Making jokes in between the songs and generally just being great. He's touring Canada and the US right now, so I definitely recommend you buy tickets to one of his shows.
I just got prints made of one of my smaller drawings, called "Girl's Who Wear Glasses" (see image below) which can be obtained here. 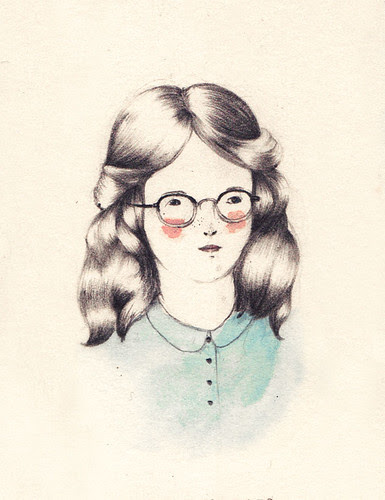 Another thing... someone asked me the other day if I had a newsletter, to which my answer was no. Any thoughts on whether it is a good idea to have one or not? And if it is a good idea, how to go about it?
at 6:23 PM

I think it's a good Idea. I feel silly because I have one and I'm always asking people to join but the truth is, I've never actually used it!

Hi there Sarah. Your drawings are fantastic and I'm looking forward to meeting you in person this Sunday! I'd like to ask you about how you get your prints made.

As for newsletters, there are a bunch of options, some free, most with fees based on number of subscribers. Here are some links for you to check out:
http://www.google.com/support/feedburner/bin/answer.py?hl=en&answer=78982
http://www.campaignmonitor.com/ and http://www.mailchimp.com/

this is so lovely!

Love your drawings, and this one is great.

to be honest with you, i don't particularly like newsletter. for me personally i would rather use RSS subscription to check out updates, but again, different people might have different preferences. that girl who wear glasses is sooo cute.